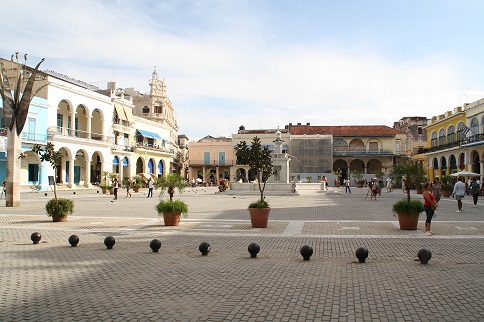 At the completion of the sixty-first year of the Revolution, Havana celebrated its glorious Fifth Century of life. The hashtag “500” recalled this year in every corner of the city.

The event was witnessed by an audience of diplomats and government representatives who came from Russia, France, the Gulf countries and Spain with their ruler S.A.R. Felipe VI and his wife Letizia Ortiz. The event in front of the Capitol today the seat of the National Assembly of Cuba, returned to its former glory.

Havana, defined city of Peace and Dignity, has highlighted its pride in the eyes of the World and its people, which has always been indomitable in the face of attempts to destabilize it. As evidence of its resistance the cannons placed in a defensive position around the perimeter walls of the Castillo de Los Tres Reyes del Morro the mammoth fortification in front of the Bay of Havana designed by the Italian Ing. Battista Antonelli and built in the 16th Century to defend the city from invasions. And yet cannons, symbols of defense are scattered in the streets and squares of its historic centre.

The ceremony was presided over by Army General Raul Castro Ruz, First Secretary of the Communist Party of Cuba, President of the Republic of Cuba Miguel Diaz-Canel Bermudez and Second Party Secretary, Josè Ramòn Machado Ventura.

Addressing the guests, and the thousands of citizens and tourists who crowded the borders of a large cordoned area, the President of the Republic recalled at the end of his speech: “Havana, beautiful and sensitive, hospitable and safe for its residents and its visitors, is the city of science, dance, cinema, literature, sporting events, example of resistance before neoliberalism and imperialism ”.

The guests of honour Valentina Ivanovna Matvienko President of the Federation Council of the Russian Federation Abulahaewab A. Al Bader Gen. Director of the Kuwaiti Fund for Arab Economic Development, Dr Abdulhamid Alkhalifa General Director of the Organization Fund of the Petroleum Exporting Countries for International Development were received by Gen. Raul Castro Ruz and the President of the Republic privately, for possible economic agreements, as reported by the local press

The occurrence of the forecast will be able to revive the economic fortunes of Cuba subjected to strict restrictions due to the economic, commercial and financial blockade imposed by the United States of America.

A recognition to the architect of renewal

At the historic city of Havana, Eusebio Leal, he was awarded the Honorary Doctorate in Juridical Sciences-History of Law by the Pontifical Lateran University of Havana. The academic act in the presence of the highest local religious and diplomatic authorities in addition to Jorge Quesata and José Carlos Rodríguez Cuban ambassadors to the Holy See (Vatican City). Dr E.Leal has strongly contributed to the restoration project of over 1000 buildings in the historic centre and to the restoration of the Capitol, monumental work, with the financial contribution of the Federation of Russia.

The pride of the Cuban people

Reinaldo Garcia Sapada, president of the provincial assembly of popular power in the capital, said: “Havana has been able to preserve the architectural heritage of its colonial past, the one that the traveller loves to admire and that its inhabitants live in worship.

fact, the largely restored historical, architectural and cultural heritage has transformed the city into an increasingly important tourist site. Its historic centre, declared a World Heritage Site by UNESCO in 1982, is one of the best preserved in Latin America. Among its most representative monuments are the Cathedral of Havana, Plaza de Armas, the Castle of the Morro, the Museum of the Revolution, the National Museum of Fine Arts, the Grand Theatre of Havana, the Capitol, the Plaza of the Revolution and the Malecón, (waterfront) perhaps the most internationally recognized symbol of the city.

The 500th anniversary of Havana seems to have aroused the interest of tourists from Asian countries, Europe, Central and South America, and from the USA despite the travel restrictions in force. And with surprise we note the presence of Millennials prevailing over those of the third age. But all with a common goal: to enter into symbiosis with the character of the Cubans, to share their carefree mood, open to dialogue and availability.

One guitar and two voices in every corner of the historic centre and in all the meeting points enchant tourists as much as the vision of vintage cars left over from an era of Amistad with the USA and the stimulating phrases extolling the Freedom and the Revolution signed with the image of his heroes on the walls of houses.

All sympathizers with people that live with situations that are different from the luckier ones in the West but with great dignity and pride for their country. It took little to have this confirmation

The day of the 500th Anniversary closing celebrations cheered the people of Havana with music and shows organized in various areas of the city. Fireworks drew usual shapes and never seen geometric shapes in the sky. The same ones that illuminated Italia Avenue (alias Galiano Street) for a few nights. A light show depicting “constellations”, a gift from the city of Turin (Italy) for this multi-centennial celebration.